The Tennessee Department of Revenue recently published a redacted letter ruling, No. 20-07 (October 8, 2020), addressing whether an entity was doing business in Tennessee so as to be subject to the state’s excise (income) and franchise (net worth) taxes, https://www.tn.gov/content/dam/tn/revenue/documents/rulings/fae/20-07fe.pdf. The taxpayer at issue was a financial institution engaged in the business of owning mortgages in Tennessee and receiving payments on those mortgages. The taxpayer relied on an independent investment manager and independent mortgages brokers to obtain those mortgages. As a result, some of the mortgages from which the taxpayer received payments were secured by real property located in Tennessee and some of the borrowers were residents of Tennessee.

Tennessee’s statutory definition of “doing business” is very broad and encompasses “any activity purposefully engaged in within Tennessee by a person with the object of gain benefit, or advantage.” Tenn. Code Ann. Sec. 67-4-2004(14)(A). Moreover, the definition states that it is the “intent of the Tennessee General Assembly to subject such persons to the Tennessee franchise/excise tax to the extent permitted by the United States Constitution and the Constitution of Tennessee.” Id. So at first blush, it would appear that the taxpayer was clearly doing business in Tennessee, right? For instance, surely the taxpayer was engaged in the mortgage business with the object of monetary “gain, benefit, or advantage.” And with Tennessee’s stated intent to assert nexus as broadly as Constitutionally permissible, it would appear that the taxpayer’s activities would fall squarely into the “doing business” definition. Focusing on the big picture, the taxpayer’s business was that of generating income from the mortgage business, which included Tennessee borrowers and loans secured by real property located in Tennessee.

Nevertheless, the Department ruled that this taxpayer was not doing business in Tennessee. So why was that the outcome?

While Tennessee’s definition of “doing business” is indeed very broad and presumably easy to meet, there are statutory carveouts outlining certain activities that are expressly excluded from the broad “doing business” umbrella. These “safe harbors” – some of which have been in the statutes for a number of years – apply to specific factual instances and are set forth in detail in the Tennessee Code. One of the safe harbors applies to financial institutions whose only in-state activity “is the ownership of …[a]n interest in a loan, lease, note or other assets attributed to [Tennessee] and in which the payment obligations were solicited and entered into by a person that is independent and not acting on behalf of the owner.” Tenn. Code Ann. Sec. 67-4-2004(14)(C). The ruling examined all the relevant facts and concluded that the taxpayer’s business activities were indeed limited to those outlined in this specific carveout. As a result, the entity was not doing business in Tennessee and was not subject to the excise and franchise taxes.

This ruling reinforces an important lesson in this post-Wayfair era of reduced commerce clause scrutiny, lowered nexus thresholds, etc. It may be easy for taxpayers in 2020 to assume they have triggered nexus and an income tax filing obligation based on the slightest level of economic activity occurring in a state. That has certainly been the trend with state and local taxation in the past few years. Many states have enacted factor presence provisions for their income/gross receipts tax schemes similar to those that were widely enacted for sales tax purposes following the US Supreme Court’s 2018 Wayfair decision. Under these factor presence provisions, taxpayers exceeding a certain level of sales sourced to a state as determined for apportionment purposes will generally be deemed to have triggered nexus and created a filing requirement in that state. So far approximately 14 states have enacted such provisions (including Tennessee) for their income/gross receipts taxes, with more states expected to follow.

However, it may not always be correct to assume you have triggered nexus based on economic activity within a state or exceeding a certain dollar threshold of sales. Always be sure to thoroughly examine a state’s nexus and “doing business” statutes and regulations before acceding to nexus. Like the fortunate would-be taxpayer in Ruling 20-07, you may find that there are exclusions to these generally very broad imposition and nexus provisions that keep you from paying a tax you might otherwise think applies. 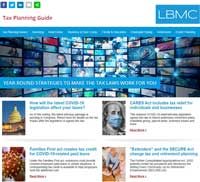